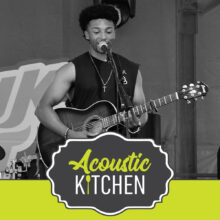 Seth Witcher is a 21-year-old music artist that is fresh on the scene in the Lehigh Valley. He has been infatuated with music beginning at age 6 and has been singing/playing the guitar ever since then. Seth performs on a semi-hollow guitar that he built in high school, and has performed live for almost three years as of December 2017. Since then, he has performed at PPL Center, CocaCola Park, Valley Preferred Cycling Center, Wind Creek Resort, and Musikfest.  Though Seth has been performing for such a short time, but he already has over 200+ live performances under his belt. Seth’s passion for music is what drives him everyday. Seth’s latest single, “Marionette” was released on March 13th 2020.  Bring the kids and enjoy his Acoustic Kitchen debut — Follow him on Facebook.